Nathan talks with Julia about road rage and dealing with anger on the road. 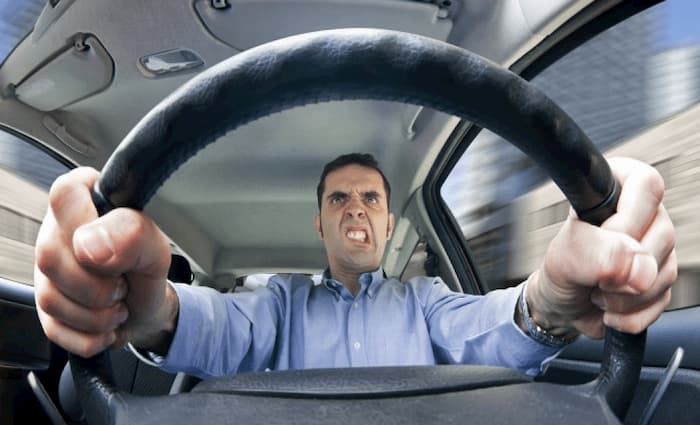 I can seriously get mega road rage.

Road rage is anger drivers feel towards other drivers about how they drive. Notice the following:

I think that some people are selfish and it drives me bonkers.

When something drives you bonkers, it annoys you. Notice the following:

So you have road compassion and road rage at the same time?

Compassion is sympathy or pity for people who are suffering. Notice the following:

As you’re driving along, your road rage manifests.

When something manifests, it becomes clear for other’s to see. Notice the following:

talk you through it

This person has to calm you down and talk you through it.

When you talk someone through something, you give them guidance as they do it by talking to them and giving help or encouragement. Notice the following:

Julia: So Nathan, I got a ride here with you today and I noticed in the car that you were a little bit angry.

Nathan: You know that was me toned down.

Nathan: I can seriously get mega road rage.

Nathan: I think it’s because I think that everybody should be like aware and considerate of everything around them and I try to be so I try to never go over the speed limit. If I can see like there’s a row of traffic coming on and there’s a car stopping the traffic because they want to turn, I always try to let them turn and I think that some people are selfish and it drives me bonkers.

Julia: So you have road compassion and road rage at the same time?

Nathan: Yeah, maybe. But it’s interesting because I’m going through a process at the moment of trying to wash away this road rage and actually it comes from your husband. He’s kind of like my yogic master and he’s telling me all these things to help me. He’s, when somebody does something crazy and your husband is in the car with me going to work every day…

Julia: Does he give you the voice in their head?

Nathan: And he says you know it’s just a mistake. They didn’t normally want to do that kind of thing but just this one time they made a mistake and they probably won’t do it again and it doesn’t matter. Or if I say yeah but lots of people do that and he says but they’re not going to change, you can’t drive their car, you can only…

Julia: He’s infuriating with his wisdom, isn’t he?

Nathan: Well but it’s useful because it’s me changing, like it’s helping reduce my stress but it’s made me think about some other things as well.

Nathan: I reckon five years ago when the economy was pretty good that would have been a possibility but I think that now that maybe people don’t have that money to splash around.

Julia: We’re all just stuck with our road rage then?

Nathan: Stuck with my road rage.