Peter talks with Jana about why conditions favor shipwrecks in some parts of the world. 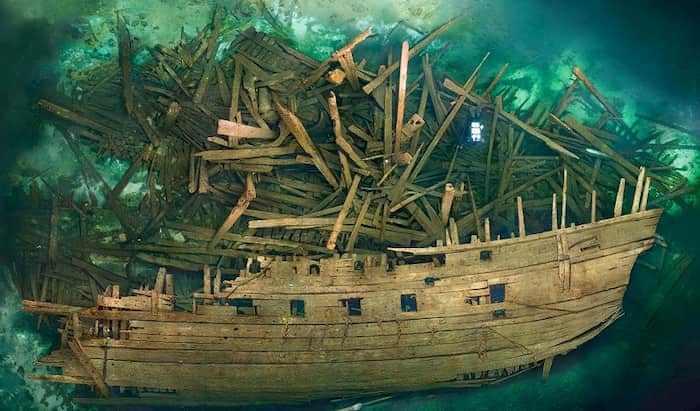 I guess there are many ships around the southern tip of Africa, because there is really bad weather.

The ‘southern tip’ of a country is the point that is the furthest to the south. Notice the following:

Another reason for sunken ships is piracy.

‘Piracy’ is what pirates do. It is robbery or illegal violence on the sea. We also ‘piracy’ to refer to illegal copies of merchandise. Notice the following:

Pirates were after the loot on the ships.

If you are ‘after something,’ you are pursuing something that you want. ‘Loot’ is possessions that are taken in a forceful or dishonest way. Notice the following:

Obviously, with technological advances, it’s easier to track where the ships might be.

When you ‘track’ something, you follow it or look for it using some strategic method. Notice the following:

I think they can use satellite navigation and things like that.

‘Satellite navigation’ is a system used for directing yourself to a specific place. Notice the following:

The go through old shipping routes to find out where ships possibly got lost.

A ‘shipping route’ is the path that cargo ships take to get from one place to another. Notice the following:

I think it involves a lot of initial capital investment.

‘Initial capital investment’ is the money you have to pay to start a company or organization.  Notice the following:

Jana: So, Peter, I’ve been asking you about hunting for treasure. Can I ask you a few more questions?

Jana: So why are there so many sunken ships in South Africa?

Peter: Well I guess around the southern tip of Africa because of the really bad weather. It really changes really quickly in those parts and with the ancient ships I guess they weren’t really prepared for that kind of weather, it’s unexpected, so I think that’s probably one reason. And I think one of the other reasons is probably piracy, people that were after them, the loot I guess if you want to put it that way, yeah.

Jana: Right, and if it’s so dangerous, how do people find these sunken ships nowadays?

Peter: I think, obviously with technological advances it’s easier to track where the, possibly where these sunken ships might be. I think they can use satellite navigation and things like that but obviously also finding out more about history and, you know, going through historical records and finding out the old shipping routes and possibly where ships got lost and finding it that way, I think, is now, is more easier than it used to be.

Jana: So it sounds like an interesting combination of technology, science, history…

Peter: I would guess so.

Jana: So your friend does this as a hobby. Do you know if it’s very expensive? Is it a big investment to…?

Peter: As far as I remember what he told me and I think it’s really expensive and they formed a little company to start off with but because it involves so much searching and basically doing historical research, also doing a lot of preparation and technological preparation and finding, first tracking, sorry first finding places where possible finds may be and then actually preparing equipment and some of it’s really deep sea diving so it involves, I think, a lot of initial capital investment to get it going. Obviously there might be a lot of return when they actually find something but I think in many cases they don’t find as much as they expected so there’s a potential for losing a lot of money so you’d have to have quite a bit of capital investment behind you if you start out.

Jana: Right. So you need a lot of courage and a lot of money?

Peter: Yes. But I think he’s an adventurer so he, I think he goes where adventure leads him so it would be a nice job to do I think.