John and Sarah look at the good and bad points of trying to go to Mars. 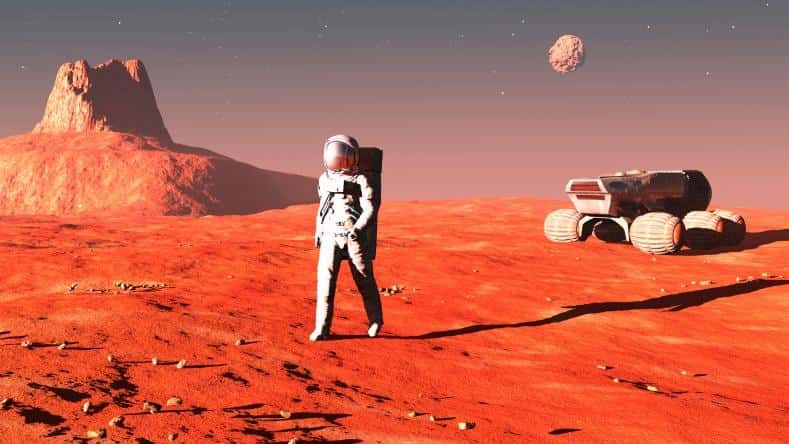 I see what you mean

I see what you mean

The phrase, I see what you mean, is nice way to say you understand a person’s opinion, even though you might disagree with it. Notice the following:

We need clean water and vaccines.

A vaccine is medicine that protects people from illness or disease. Notice the following:

What comes to mind is war.

When something comes to mind, you think about it for a moment. Notice the following:

But war goes on and on for days and days.

When something goes on and on for a long period of time, it does not stop, even though people want it to stop. Notice the following:

We could get rid of a terrible disease.

When you get rid of something, you remove it from your life. Notice the following:

We’ll have to agree to disagree.

The phrase, agree to disagree, is a nice way to end a conversation when two people will not agree with each other. Notice the following:

Sarah: So do you think we should sent people to Mars or Moon to spend all this money on space travel?

John: Well, I think we should. Space travel can give people hope for the future, and space travel can unite people from different countries for a common goal.

Sarah: But do any countries work together to travel in space?

John: Oh certainly. The International Space station has astronauts from different countries working together. And I think that a joint effort is the best way to do space missions. I think that we could go back to the Moon and learn much more by going there than we can learn if we don’t go there.

Sarah: I see what you mean, but I think we could learn more and we could improve more if we can help the people on Earth. Think of everything we could learn from the children that can’t get an education these days. Maybe the next Einstein is a poor little girl who doesn’t have the money to go to school. If we spent more money on school or clean water and vaccines, maybe we could learn more from ourselves than from going to space and going to Mars.

John: I agree with you that more should be spent on education, but we don’t need the next Einstein if were not doing space travel. The problem is what are people with money willing to spend it on. I think that it would be nice if we could have all the rich countries spend money on education for poor people, but if you look at the numbers, the cost of one space mission is much cheaper than the things we spend money on now.

John: Well, the first example that comes to mind is war. One day of war is so expensive for all the governments and the militaries that are involved. One day of war costs more money than one space mission. But war goes on and on for days.

John: So, if you think about money in terms of … sorry … so the money for a space mission is expensive by itself, but when you compare it to other things it’s actually kind of cheap.

Sarah: Maybe we’ll have to agree to disagree.