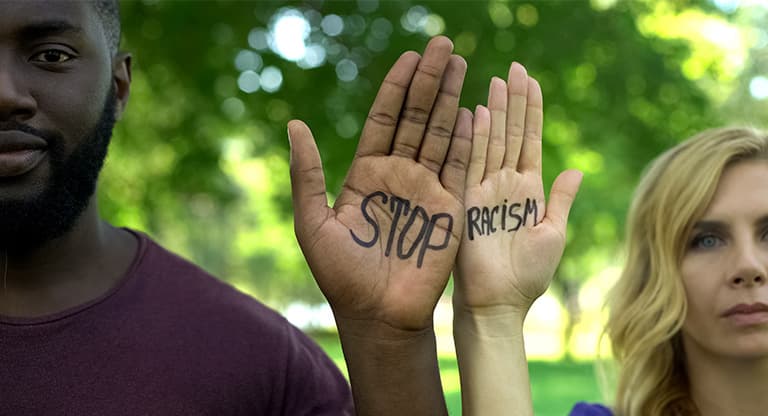 Racism takes many forms and can happen in many places. It means treating someone poorly because of their skin color, ethnicity or where they come from.

This could be harassment, abuse or humiliation – but it may not always involve violent or intimidating behavior. Name-calling and hurtful jokes can be a form of racism, and so can excluding people from groups or activities.

Racism can take place in many situations. It can happen in a public space, like on the sports field or at work. It could also be online, or something you see in the media.

Racism can be revealed through people’s attitudes, as well as their words or actions. It can also be reflected in systems and institutions. But sometimes it may not be visible at all. Not all racism is obvious. For example, someone may look through a list of job applicants and decide not to interview those with certain surnames.

Racism includes all the barriers that prevent people from enjoying dignity and equality because of their race.

The Challenging Racism Project has found that 20 per cent of Australians surveyed had experienced racial discrimination in the form of race hate talk, and about 5 per cent had been attacked because of their race. According to the Scanlon Foundation’s Mapping Social Cohesion survey in 2016, 20 per cent of Australians had experienced racial or religious discrimination during the past 12 months.

Some groups experience racism at higher rates. Aboriginal and Torres Strait Islander people, and those from culturally diverse backgrounds, often have to deal with systemic forms of discrimination. Such experiences limit the access that members of these groups enjoy to the opportunities and resources offered to many people from Anglo-Australian backgrounds.

For many Aboriginal and Torres Strait Islander people, systemic racism is bound up in historical disadvantage and mistreatment. Practices such as that of removing Aboriginal children from their families have caused huge amounts of hurt and pain for individuals, families and communities. This shows up in lots of different ways – poor health, high rates of mental illness and family breakdowns.

Migrants and refugees also regularly experience racism, in particular those who have recently arrived. Media reports and commentary that use negative stereotypes about refugees and migrants can fuel prejudice against these groups in the wider community. These attitudes can make it difficult for new arrivals to find housing and jobs, and to feel connected to their communities.

Where does racism happen?

Racism can happen just about anywhere. Research indicates that the places where racism is experienced most frequently include in the neighborhood, shops, and in the workplace. It can emerge in other spaces such as on public transport, sporting events or at schools.

Expressions of racism can also be found in media. This happens when, for example, racial groups are represented in an unfair or negative light in news reports or commentary. Many regard the lack of cultural diversity represented in media as another form of racism.

In recent years, racism has become a particular problem online. Whether it is offensive comments on social media, inflammatory memes or hateful videos shared online, cyber-racism has had a significant impact on the growth of racist attitudes. Those spreading racist messages can often do so with the benefit of anonymity.

Why are people racist?

People aren’t born with racist ideas or attitudes. Racism is something that is learned.

There remain a small minority of people who believe that some races are superior to others. While most people in Australia today accept the diversity of our society, some also believe racial groups should not mix. A belief in racial superiority or purity can lead to racial hatred.

However, not all racism comes from hatred. Some of it can come from fear and anxiety. People may worry that some groups pose a threat, whether to the safety of the community, or to the national identity.

Ignorance can play a part in feeding people’s racial attitudes, as can a need to belong to one’s own group. Racism isn’t always malicious. Sometimes the harm of racism can be done innocently, because someone may not know better.

Why is racism a problem?

Racism causes harm to those who are on the receiving end. It hurts individuals, communities and our society at large.

Studies show that experiencing racism has profound effects on people’s health and welfare. The effects can include feelings of sadness and anger, even anxiety and depression. The regular experience of racism can lead to people withdrawing from work or study, and diminish their quality of life.

It can also hurt people’s freedom and dignity. Those who endure racism can be made to feel they have less freedom, or are second-class citizens.

In a diverse country such as Australia, the effects of racism aren’t confined to individuals. It has the potential to affect all of us. Racial hostility creates a society where people don’t trust and respect each other. It challenges our society’s values of equality and fairness.

Harassment: behavior that annoys or upsets someone

Abuse: to use something for the wrong purpose in a way that is harmful or morally wrong

Humiliation: the feeling of being ashamed or losing respect for yourself, or an occasion when you have this feeling

Diverse: including many different types of people or things

bound up: closely connected or involved

refugees: a person who has escaped from their own country for political, religious, or economic reasons or because of a war

stereotypes: a set idea that people have about what someone or something is like, especially an idea that is wrong

fuel: Something that fuels a feeling or a type of behavior increases it or makes it stronger

prejudice: an unfair and unreasonable opinion or feeling, especially when formed without enough thought or knowledge

emerge: to become known, especially as a result of examining something or asking questions about it

cyber-racism: racism on the internet

anonymity: the situation in which someone’s name is not given or known

malicious: intended to harm or upset other people:

profound: felt or experienced very strongly or in an extreme way:

diminish: to reduce or be reduced in size or importance

hostility: an occasion when someone is unfriendly or shows that they do not like something