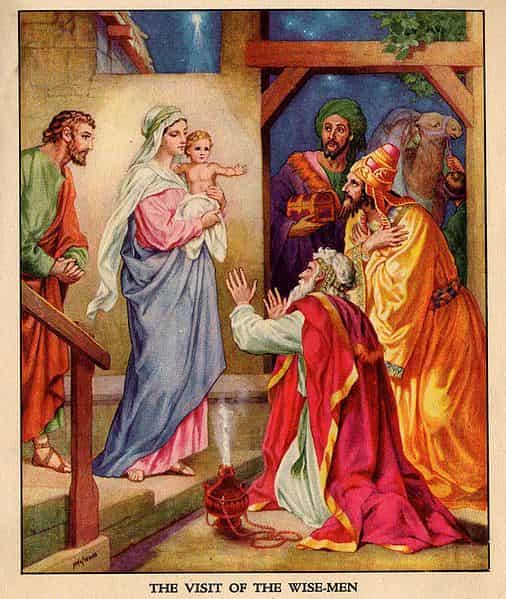 Christians all over the world celebrate the birth of Christ on December 25 . It is a joyous holiday where families get together, give each other presents, decorate houses, sing traditional songs and go to mass .

The word Christmas comes from the old English “Christes Maesse” , which means Christ’s mass . Although Christians believe that Jesus was born in the small town of Bethlehem, we don’t know the exact date of birth because stories about Jesus Christ were written down much later.

Today, most countries celebrate the Christmas holidays from December 25 until January 6. Many Christians celebrate this day as Epiphany , the day on which the three wise men came to visit baby Jesus.

Giving presents is a special part of Christmas. In many countries magical figures like Santa Claus or Father Christmas bring children their gifts .

Decorating the house is an old custom that comes from pagan times. In northern Europe branches from evergreen trees were brought into the house to show that spring would return soon.

Our traditional Christmas tree also comes from northern Europe. In the Middle Ages people set up trees and hung apples on them. As time went on more and more objects were added : candles , cookies , mistletoe and other things. German settlers brought the Christmas tree to America. Today families decorate their trees with ornaments , glitter , candy cane and electric lights. Some people even put up trees outdoors in their garden.

Christmas cards started to become popular in the middle of the 19th century . Today, billions of cards are sent all over the world.

In medieval Europe Christmas was a celebration of feasting and dancing. Nowadays many families enjoy special meals. Turkey, goose, duck , fish, roast beef are some of the many dishes that you can find on dinner tables around the world. Housewives bake cakes and cookies.

Christmas is also a time of singing carols, songs that come from folk songs and ballads . Most of the carols we sing today were written in the 1800s. “Silent Night, Holy Night” is the most popular song . It is sung all over the world.

Many Christians attend mass on Christmas Eve or Christmas Day. In some churches children act out the story of the birth of Christ and people go to midnight mass.

Christmas in other countries

In America children hang stockings over the fireplace. When they are asleep Santa Claus arrives with his reindeer , slides down the chimney and fills them with presents .

British children receive their gifts from Father Christmas. They enjoy a Christmas dinner of roast turkey and mince pie or plum pudding . People often go around from house to house and sing carols.

Children in France welcome the visit of Pere Noёl. They leave shoes by the fireplace so that he can fill them with gifts . After midnight mass many families have a special supper called “Le reveillon”. They eat a “Buche de Noёl”, a special cake that looks like a log .

In many Italian homes a nativity scene called “presepio” is the centre of celebrations . Many families have fried eel , called “capitone” , as a Christmas Eve supper . Other special dishes are “panetone”, a bread with dried fruit, and “torrone”, candy made with nuts and honey. On Epiphany “La Befana”, a nice witch, brings children presents.

In Sweden, Christmas presents are brought by Jultomten, who has elves as helpers. In this northern European country the Christmas season begins on December 13—St. Lucia Day. On this day the oldest daughter of the house puts on a white dress and wears a wreath with candles on her head. She serves coffee and buns to the rest of her family.

For German and Austrian children festivities begin on December 6, when St. Nicholas comes to their homes and gives them a bag filled with sweets, oranges and nuts. Christmas presents are brought by the “Weihnachtsmann” or “Christkind”. Families like to eat stollen, bread filled with fruits.

In Bethlehem, a small town in today’s Israel, there is a colourful procession on Christmas Eve. People walk through the narrow streets and carry a picture of Jesus in a cradle to the Church of Nativity . There it is put into a glass manger . Pilgrims from all over the world travel to Bethlehem to take part.

In Mexico children have a Christmas party and hang a “piñata” , on a rope from the ceiling . This is an earthenware jug or a paper figure that is filled with candy or small toys. Then they blindfold themselves and try to hit it with a stick until it breaks and the sweets and toys fall out. Many people take part in processions that show how Mary and Joseph searched for a place to stay in Bethlehem.

In the southern hemisphere Christmas comes during the hot summer season. In Brazil people have outdoor picnics and fireworks . Australians gather outdoors and spend the holidays on sandy beaches. For pupils it’s the end of the school year and the beginning of the summer holidays.