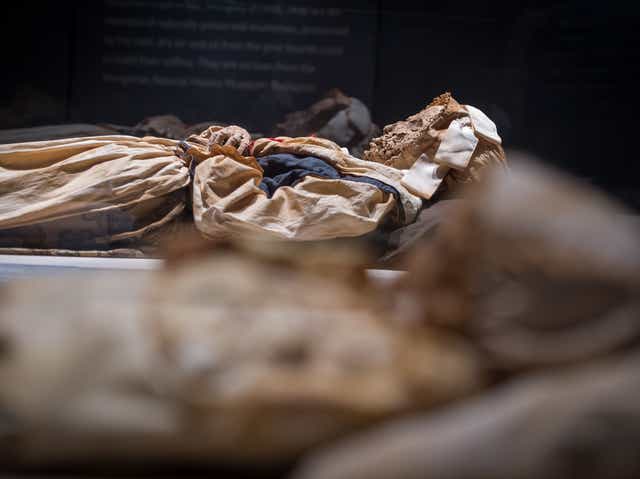 When a person dies their body decays. Skin and flesh disappear and as time goes on only a skeleton is left. A mummy is the dead body of a person or an animal that has been preserved by wrapping cloth or other material around it. Mummies have been found all over the world, most of them in Egypt. However, other cultures in South America and Asia also mummified their dead.

The oldest mummy ever found dates back to 6,000 years before Christ. The British Museum in London currently displays the oldest Egyptian mummy, dating back to 3400 BC. The British archaeologist Howard Carter discovered the remains of Tutankhamun in 1922, probably the most famous mummy in the world.

Today scientists study mummies with special equipment and X-ray machines. They discover more about the bodies of ancient people and how they lived. They can also find clues to what they ate and what kind of diseases they had.

Egyptian society mummified their dead for many centuries. They believed that they had to preserve the body for life after death. The soul of the dead would be reunited with its body in the afterlife.  At first, they started burying dead people in hot sand; later on, they built special tombs. Egyptians wanted their relatives to feel comfortable after death.

Later on bodies were wrapped in cloth to stop bacteria and other harmful substances from getting to them. Embalmers dehydrated bodies and removed all liquids from within. A substance called natron was used to cover the bodies. It extracted moisture from the skin and flesh. Inner organs, including the brain, were removed; the heart was usually left in the body. Mummies often received a face mask.

Mummies were then put into coffins, made out of wood or stone. Relatives decorated them and buried them under ground.  The extracted inner organs were put into jars and placed next to the mummies. Sometimes animals were also mummified and put next to their owners.

Poor people did not have the money for such complicated procedures. Mummifying pharaohs and noblemen, on the other hand, proved to be a special and demanding job. In ancient Egypt, it took 70 days to finish a complete mummification process.

The Inca in Peru mummified dead people by using salt. In other areas, the dry climate helped preserve mummies.

Mummification still occurs today in some societies. Mao Zedong  and Lenin were famous Communist leaders who were embalmed.