The Less Religious You Are, the More Likely You Are to Believe in UFOs 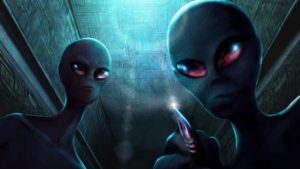 If you’ve ever seen “The X-Files,” you may recognize the phrase “I Want to Believe” from a poster in Agent Fox Mulder’s office. It’s his mantra, of course, but it’s an idea that’s much bigger than that, too. This phrase may be the common thread between two unlikely groups: avid churchgoers and UFO criers. Pull up a pew, Agent Mulder.

If you’re not interested in traditional religion, try UFOs on for size. According to a 2017 study published in Motivation and Emotion, God and E.T. aren’t so dissimilar after all. The study, conducted by North Dakota State University researchers, cites a sort of correlation between the two: The less religious someone is, the more likely they are to believe in aliens.

Not just any aliens, mind you. After all, there is overwhelming evidence that aliens are totally, probably, more than likely out there somewhere. (This isn’t Mulder rambling; this is the math and science behind the Fermi paradox.) We’re talking UFOs, alien contact stories, extraterrestrial intelligence swooping in on Earth — conspiracy theories, basically. If you’ve ever had someone try to sway you on Roswell, the Dulce alien base, or hollow Earth theory, you know who we’re talking about.

I Want to Believe … in Something

Listening to Area 51 truthers wax on about government cover-ups of moon men isn’t as off the wall as it may seem (hear us out on this). Both the Martian conspiracy theorists and God enthusiasts are both, at least in part, motivated by the same thing: the pursuit of meaning. The previously mentioned study found that paranormal beliefs about extraterrestrial intelligence (ETI) are partially motivated by the need for meaning, and that this existential motive helps explain the inverse relationship between religiosity and ETI beliefs.

Religion is also something people look toward in moments of existential stress. According to a 2013 study, people use religion as a tool to help themselves “resolve the challenges of their lives and identity crisis.” In general, we all just want something to believe to make our lives easier, more meaningful, and purposeful. When someone has an existential void, they’ll seek out a belief to fill it. God? Sure. Ghosts? Go for it. Science? Hell yeah. Extraterrestrial intelligence? Why not. In our quest for significance, anything is on the table.

an idea, feeling, or feature that connects the different parts of an explanation, story etc synonym strand

doing something as much as possible synonym keen

a connection between two ideas, facts etc, especially when one may be the cause of the other

a creature that people think may exist on another planet

when someone tries to get, achieve, or find something in a determined way

relating to the existence of humans or to existentialism

if there is an inverse relationship between two amounts, one gets bigger at the same rate as the other gets smaller

?Is alien life a myth or reality

?Why do most people believe in religions

?In what conditions do people most feel the need for religions