The Swedish Concept of Fika Can Make You More Productive 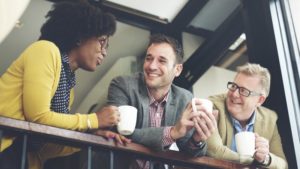 You probably remember when “hygge” was all the rage — you know, the Danish art of coziness. But snuggling into a fleece blanket with hot tea by a fireplace isn’t the most practical way to  wind down when you’re not in your living room. A similar Swedish concept may have more to offer you, especially at work. It’s fika time

Don’t Call It a Coffee Break

Fika is essentially a coffee break, but according to the Swedish Institute’s website, Swedes prefer not to translate the word for fear of simplifying it. Derived from the Swedish word for coffee (kaffe — just say the syllables in reverse), the long-held tradition isn’t just an excuse to take a time-out for a cup of joe. This ain’t your average Starbucks run. Similar to the Danish hygge,  fika is a concept larger than its action. It’s a coffee break, yes, but it’s also described by the Swedish Institute as a “social phenomenon.” It’s a retreat from the stresses of the day with a real focus on bonding with the people around you. Swedes shoot to have a good, quality fika session several times a day (though in reality, it’s fewer), which can happen anywhere and at any time. Why not now? Take a little fika before you keep reading. We’ll wait.

Before the thought of taking multiple chunks out of your workday to kick back and sip some  java with your colleagues makes you panic, hear us out. Enjoying a nice fika doesn’t mean  you’re lazy; it may actually mean you’re even more ready to get right down to biz. Perhaps counterintuitively, taking a fika may help you be more productive at the office. Plenty of studies have shown that carving out a 15-minute break from your workplace duties can help you stay focused throughout the day, fuel your productivity, improve your self-control, and keep you  from totally burning out by 5 p.m. — not to mention just flat-out make you happy

Sound too good to be true? There’s some proof that taking a fika is good for both you and your company

“The fika break that we have twice or thrice a day makes us more productive and efficient,” Lars Åkerlund, who opened a Swedish coffee chain in New York called Fika, tells Quartz. According to the BBC, many Swedish companies have experimented with mandatory fika breaks, citing the productivity bump that a little break can spawn. It seems to be working: A 2010 Grant Thornton study found that Swedish workers were the least stressed worldwide. And Swedes are no less  productive than the rest of the world, even considering their frequent fikas, shorter workdays, and the fact that only 1 percent of Swedish employees work overtime, according to the OECD Better Life Index. In 2014, Sweden ranked 11 out of 38 countries analyzed for productivity. Anyone else fancy a fika right about now

to settle into a warm comfortable position

the woolly coat of a sheep, especially the wool and skin of a sheep when it has been made into a piece of clothing

something that happens or exists in society, science, or nature, especially something that is studied because it is difficult to understand

to move away from the enemy after being defeated in battle

to develop a special relationship with someone ➔ bonding

contrary to intuition or to common-sense expectation

if someone or something is efficient, they work well without wasting time, money, or energy opposite inefficient

if something is mandatory, the law says it must be done synonym

?What is a fika

?Why many people fancy a fika

?What are its benefits for offices and companies