Jen and Todd discuss if they like giving gifts. 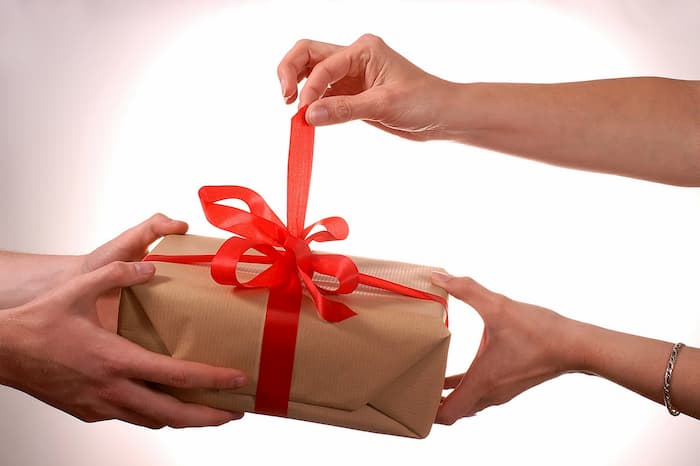 It’s the though the counts.

It’s the thought that counts.

This phrase means that the act of giving a gift is more important that the actual gift. Notice the following:

I’ll pick something up for my mom

Here, pick something up means to buy something. Notice the following:

It would create a problem.

When you create a problem, you make a troublesome situation. Notice the following:

It’s kind of hard to climb back from that

Here, to climb back from something to means to limit the damage or negative affect of something. Notice the following:

To gather around means to get together or make a group. Notice the following:

Todd: So, Jen, the holiday season is coming up, and many cultures give gifts around the New Year’s for different holidays. First of all, do you like to give people gifts?

Jen: What kind of a person would I be if I said, “No, I don’t like people giving people gifts?” But yeah, I’m not really good at choosing gifts for people though.

Todd: Why do you think that?

Jen: Because every time I go and buy something for someone, I want to buy something that I like, and I would think that it would look good on them or something. But then my friends end up being like, you know? They don’t really like the gift so much because it doesn’t suit them, or something?

Jen: For example, I bought this pair of earrings for this friend, and then I realized that she doesn’t really like jewelries and stuff, so she never wore it.

Todd: Right, yeah. It’s kind of hard to know what they want. Actually, for that reason, I don’t like giving gifts at all. I think it’s because of my background, like studying economics. It’s just, to me, it’s inefficient. You’re buying something, you don’t know if they really want it, and they say, “Oh. It’s the thought that counts.” But the time that you waste finding the gift and then you give them the gift, and maybe they don’t use it. So I’m not a big fan of gift giving. Even for birthdays.

Jen: I actually agree with you. And for me, if it was my birthday, I would rather have someone make a card for me. It would have more value than someone buying gifts for me anyways, you know?

Todd: Yeah. I think, like in Asia, it’s more common, which I like. And that’s kind of the gift you give to somebody when you travel. So if I travel somewhere, I’ll pick something up for my mom, from a country I went to. Or somebody … Let’s say they went to Korea or China during their break, they might bring back some special food to the office, and everybody can have a cracker or a cookie, or something like that. I like that.

Jen: I’m from Nepal, and here too. In my country too, they would rather give us like, fruits and like different kind of … Other sweets and stuff rather than clothes and jewelries, you know?

Todd: So true. Yeah, actually another thing I like to do is sometimes buy a really nice gift, and then for one year, and then maybe for the next year or two, don’t buy the person a gift. For example, like maybe one year, I bought my landlady, who I’m very close to, I bought her an iPad. I’m like, “She’s kind of older, and she never had an iPad.” So I bought her an iPad, but then the next year, I didn’t buy her something really expensive. I bought her like a box of chocolates or something, you know.

Jen: In that case, I think it would create a problem, because once you give someone a really special thing, then the next year, they will expect something more, you know?

Jen: So like, it’ll be really disappointing if they get something that’s not very valuable than it was the year before.

Todd: Yeah, it’s kind of hard to climb back from that, isn’t it?

Jen: Yeah. Off an iPad? It would be bad.

Todd: Though, she’s a really nice woman. She definitely … I don’t think she thinks that way at all. She’s actually better at giving me gifts. She’s always giving me gifts. So, have you gotten any gifts recently for anybody? Are you already planning to get your gifts for the end of the year?

Jen: I actually just presented a pair of shoes for my friend, because it was her birthday. The thing is, we don’t really celebrate New Year at this time of year. It’s kind of different for us, because we celebrate the Lunar …

Todd: Ah right, which is in April, right?

Jen: So haven’t really thought about like Christmas gifts or anything.

Todd: So in your country, in Nepal, like when do people give gifts? On what occasions?

Jen: During our New Year. We have a lot of festivals, so more than gifts, we just invite people and … you know? Gather around and eat good food, that’s it.

Jen: Yeah, I believe so too.