Ben and Hana talk about famous people they like as artists. 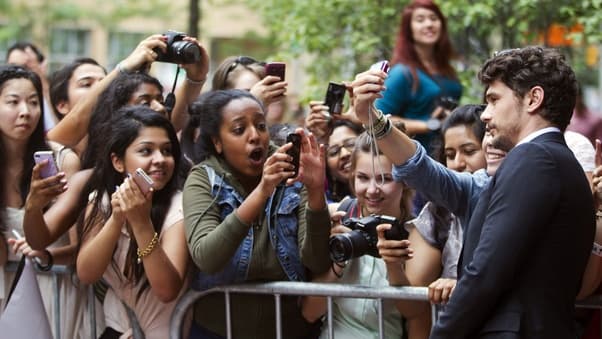 Let’s talk about some celebrities.

A celebrity is a very famous person, often an actor, musician or athlete. Notice the following:

Let’s talk about someone you know.

The words someone and somebody refer to a person that is not named or specified. Notice the following:

she kind of got big

She kind of got big.

Here, the phrase ‘she kind of got big’ means that a person became famous or popular quickly. Notice the following:

She kind of got big somehow.

Here, somehow means in some way, or in a certain manner. The details are not mentioned. Notice the following:

When someone or something is gorgeous, that person or thing is very beautiful or attractive. Notice the following:

When someone or something is gorgeous, that person or thing is very beautiful or attractive. Notice the following:

Hana: First I like her songs, but mainly I like her look you know. That red lips and white skin and blonde hair. Kind of typical American.

Hana: When I saw her for the first time I was like, “Wow, she’s gorgeous.”

Ben: Wait you mean, you saw her picture on the internet or in the news or you saw her in concert?

Hana: Yes she was, at that time she was still singing like country music but yeah I thought she’s amazing.

Ben: I have an interesting fact about her actually.

Ben: So apparently, she is from right outside of my hometown actually.

Ben: Yeah that’s where she was born and then she was doing music around there first and she got kind of big somehow. I don’t know how. I’m not really interested in her.

Ben: She’s cute but I don’t really like her music. But yeah that’s where she got started somewhere by my hometown apparently.

Hana: I mean she’s like the typical woman figure you know? Girly style and nice skin and her movement and her songs is like girl, all American girl.

Hana: So that’s why I like her. How about you?

Ben: I have a lot of bands that I like but I recently saw this movie that I really like. Do you know the actor, Edward Norton.

Ben: He’s getting really popular. He’s been popular for awhile. He does all different types of movies like crime dramas, like action, thrillers, science fiction. He’s very, how would you say, he can do many different types of roles.

Ben: So I recently saw, it’s an old movie of his but it’s called Fight Club. It’s him and Brad Pitt. Have you heard of it?

Hana: I think I’ve seen it. I don’t really remember.

Ben: It’s old. It’s from like 1998, 1999 but it’s still a really good film I think. I think if I was to talk about a celebrity that I liked definitely Edward Norton. His acting is really good I think.

Hana: Is he English or is he American? Where’s he from?

Ben: He’s from the U.S. Yeah he’s American for sure. Yeah what about you? Do you have any actors or actresses that you like?

Hana: Yes, my favorite actor is, oh gosh, I can’t remember his name. You know the guy from-

Ben: Maybe I can help you.

Hana: Notting Hill. The guy from the Love Actually.

Hana: The British guy with you know the eyes.

Hana: Hugh Grant yes. That’s the guy. Yeah, I like him.

Ben: Why? Can I ask? He’s kind of like a romantic comedy star but why do you like his acting?

Ben: Okay so he looks sweet.

Hana: I’m like Brad Pitt or other celebrity male celebrities, he’s not like super handsome. He looks kind of ordinary guy and kind of makes me feel like nice.

Hana: The clothes I guess.

Ben: Yeah, yeah that’s true. I don’t think I’ve ever seen a movie with him.

Hana: Have you ever seen? No?

Ben: No, I’m just not like a … You said he’s in Love Actually, he’s like a romantic comedy guy, right?

Ben: How about me what?

Ben: No, not really. But there is one I do like it’s called My Best Friend’s Wedding.

Ben: I believe Julia Roberts is in that one.

Ben: Do you know who she is?

Hana: Yeah. She is famous, yeah.

Ben: Yeah that’s kind of a good … That’s like a 90’s classic romantic comedy I think. Have you seen it?

Hana: I think I have.

Hana: Yeah, yeah I think so.