خانه » Animals in the Zoo 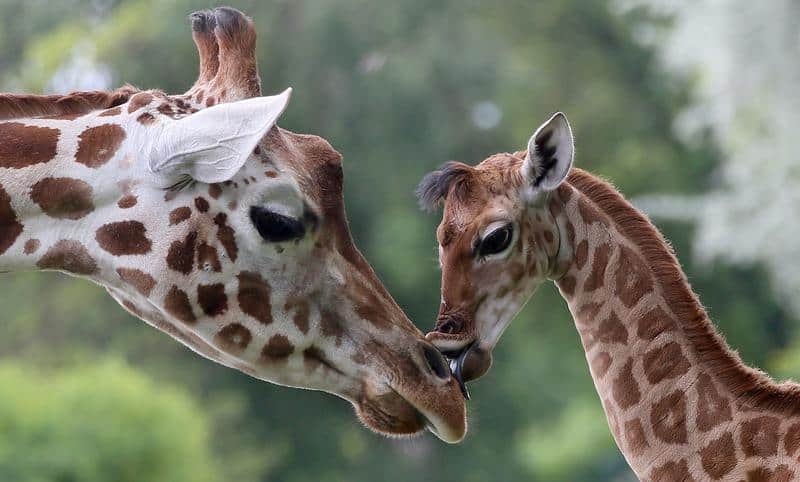 Their face is the same height as your face.

Have you heard about llamas spitting at people before?

You spit with your mouth, by pushing out food or liquid quickly. Notice the following:

Zebras are black and white with stripes.

Stripes are lines that are spaced by different colors. Notice the following:

I have never seen a bear in the wild.

The phrase in the wild refers to being in nature where there is no human development. Notice the following:

They’re so big with huge teeth and giant claws.

Claws are the sharp nails on animals such as cats and dogs. Notice the following:

We often use the phrase kind of like or sort of like to compare similar things. Notice the following:

Todd: So Meg, we are talking about animals; do you like to go to the zoo?

Todd: Okay. So when you go to the zoo, what animals do you like to watch?

Meg: I really like to watch giraffes. Giraffes are so tall and giraffes look really soft and friendly, so I wish that I could touch a giraffe someday.

Todd: Oh, that’s so true. There is a zoo near my house in California, and you can walk up some stairs and then you can feed the giraffes, and their face is the same height as your face, and they look really, really cute. Yeah, giraffes are great.

Meg: Giraffes are so cute. Maybe someday, I can feed the giraffes.

Todd: I like how giraffes look. I love their face. And I also love camels, also because I think camels have a similar face. They look really cool.

Meg: Yeah. They’re so hairy. Camels have so much hair that they look ugly.

Todd: Oh really. I like camels. They always look cool and relaxed.

Meg: They do look relaxed, but I like giraffes better than camels.

Todd: Well, what about llamas? Llamas are kind of like camels and they’re kind of like giraffes. They kind of have the same face. Do you like llamas?

Meg: Have you heard about llamas spitting at people before?

Todd: No. Actually, I think I heard camels do that but maybe llamas do it, too.

Meg: I really like the zebras because zebras are black and white with stripes. So the zebra stripes are really cool, and zebras are similar to horses. So sometimes I think I could ride a zebra if I had one.

Todd: Yeah. That would be cool. Zebras do look pretty cool. Are there any other animals?

Meg: Well, there’s one animal that I’m afraid of, and that’s a bear.

Meg: Bears are really scary and they’re so big with huge teeth and giant claws, and I feel like a bear would eat me if I met it in person.

Todd: Actually, have you seen a bear in the wild?

Meg: No. I have never seen a bear in the wild, and I really don’t want to.

Todd: Well, in California, sometimes you can see bears in the wild, small black bears. And actually, the black bears are not that dangerous.

Todd: Yeah. I mean, you need to be careful when you see a black bear in the wild, but they almost never attack anybody. So the one animal you must be afraid of though, is the mountain lion. So there are mountain lions also in California, and they are scary.

Meg: Hmm, so maybe I should avoid mountain lions, too.

Todd: Yeah. If you walk in the wild and you see a mountain lion, maybe it’s too late. You’re already in trouble.