Living Abroad Is the Best Way to Get to Know Yourself 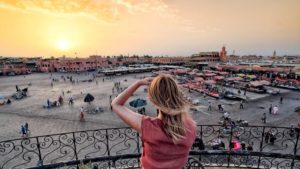 The Expat in the Mirror

The first study was pretty straightforward. They created a 12-question survey for a group split about evenly between the experienced expats and the homebodies. Participants ranked how strongly they agreed with statements like “In general, I have a clear sense of who I am and what I am,” and “I seldom experience conflict between the different aspects of my personality.” Those who had studied abroad indicated a much greater degree of certainty about their personality and self-concept. But that had the researchers wondering: what if people with a higher self-concept clarity are more likely study abroad in the first place

That’s where the second study came in. For this part, they focused their attention on people who had studied abroad and another group who hadn’t but had definitive plans to do so in the near future. Besides the self-concept clarity questions, they were also asked questions about the relationship between their sense of self and the society around them. Again, the ones who had actually lived abroad ranked much higher in terms of certainty of themselves. In other studies the team carried out, they found that the time that you spend living abroad has a greater effect than the number of countries you’ve lived in, and that students who studied abroad felt more certain about their career path and the general shape of their future.

Living abroad is different from other transitional life experiences — many of them,  such  as starting a new job, are associated with decreases in self-concept clarity. But knowing thyself is  only one of the benefits of living elsewhere. Other studies have shown that the longer people live abroad, the more creative they become. Karl Duncker’s candle puzzle (our old favorite) even made an appearance in the studies, which showed that the better-traveled people were more likely to think outside the box and come up with a solution. Another study tested the same concept and, like the self-concept clarity study, found that people were better creative thinkers even if they had definitive plans to live abroad in the near future. The science is clear: if you want to center your identity and free your mind, travel is the thing to do

Expatriate: someone who lives in a foreign country

a state of disagreement or argument between people, groups, countries etc

the clarity of a piece of writing, law, argument etc is its quality of being expressed clearly ➔ clear

a definitive book, description etc is considered to be the best and cannot be improved

?What did the first finding show

?What was the result of the second experiment

?Do living abroad and planning to live abroad make any difference in results

?What are some qualities that such people have

?Which is more effective, the number of countries one has visited or the length of stay