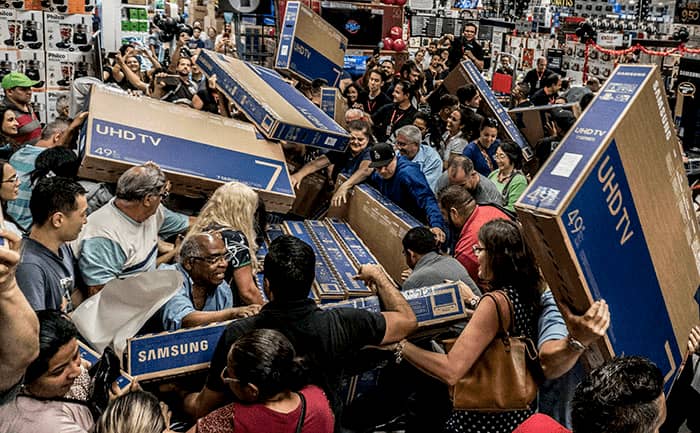 They kept ratcheting up the bargain

When sometimes ratchets up, it steadily increases. Notice the following:

In a free-for-all, there is no control in a situation. People can act as they please and disregard rules of conduct. Notice the following:

I guess that’s hypocritical for me to say

People are hypocritical when they promote one thing, and then act another way. Notice the following:

Then it’s the build-up to Christmas.

A build-up is a steady increase of anticipation for something. Notice the following:

You don’t want to face the crowds and all the hysteria.

Hysteria refers to excitement or uncontrollable emotion. Notice the following:

Aimee: OK, so hey Todd, so I have a question. I’ve noticed recently in the U.K. that this holiday called Black Friday has appeared, and this is a new thing for us. I don’t really know why it has appeared. I think it is American. Shops just give super discounts in November and people are going crazy for like TVs and stuff. Do you have experience with this?

Todd: Yeah, unfortunately, I think it is one of our worst exports. Like I am not a fan of Black Friday. We’ve had it now probably for like ten or twenty years. I can’t remember but it started where the department stores would have these massive sales on Friday which is the day after Thanksgiving, which is always on a Thursday in November.

Todd: Right, and I think it was called Black Friday because that was the day that the stores could show that they had a profit for the year, or something like that.

Aimee: OK, so it’s blatantly all about money?

Todd: Oh, totally and originally, what they would do is they would entice people with really good bargains, but then they kept ratcheting up the bargain, so now they have these really, really low teaser products, like they only offer ten TVs or something like that for like twenty bucks.

Aimee: Oh, so it’s like a limited, a really limited supply of really good deals?

Todd: Yeah, and so then what you do is you get these huge crowds that converge on these stores, and then they open the doors and people rush in and literally it’s a free-for-all. You have fights and it’s so crazy.

Aimee: I’ve seen that. I’ve seen videos and clips, and it started happening in the U.K. now

Aimee: And I can’t believe it that people can be so greedy.

Todd: And especially what’s bothersome is that you’re with your family on a holiday. You’re having a good time, and then you go to war practically. You know what I mean?

Aimee: Or your neighbor even. It doesn’t matter who it is, just fighting over a cheap TV.

Todd: I mean, I’m proud to say I’ve never been to a Black Friday.

Todd: So I guess that’s hypocritical for me to say that because you know, since I’ve never been to a Black Friday. I’ve only seen it, but I just don’t like going to shopping malls and to, like, department stores very much – big box stores. I’m just not a shopper.

Aimee: So you prefer online shopping?

Todd: I just prefer not shopping at all. Like I don’t care like what I dress or how I dress. So, like, I buy my clothes at a supermarket. You know. I know, I’m not the most fashionable person, but as for Black Friday, you know, I think a lot of times, parents what to get stuff for their kids, you know, they want to get that special gift. Maybe I think that’s what attracts a lot of the crowds.

Aimee: Yeah, it is, you know, once Thanksgiving is over then it’s the buildup to Christmas, so of course there’s the stress of preparing everything in time for that. It’s hard to resist really good bargains, I guess if you’re trying to be careful with your money. You’re trying to be sensible or there’s those gifts that, you know your child really wants, so I can understand people feel a lot of pressure to do that.

Todd: I mean, some of the stores, look like they’ve been through a hurricane after the crowds go through it. It’s crazy.

Aimee: It does sound awful. Doesn’t sound like my idea of a good time.

Todd: No. Now there is one option though if you don’t want to face the crowds and all the hysteria, you can do what’s called Cyber Monday.

Todd: Do you have Cyber Monday?

Aimee: No, I’m not familiar with it.

Todd: So Cyber Monday – I think it’s the Monday after Black Friday – and you just get all the deals online over a 24 hour period.

Todd: No, this is just the online stuff, so I think it’s just, you know, the Amazons and all the online stores, that they want to have their deals that people can buy.

Aimee: They wanted a piece of the action, basically.

Todd: Yeah, yeah. Exactly so they can make it super, super …

Aimee: It’s too much!

Aimee: It is all too much.