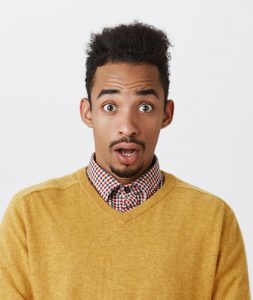 Facial expressions are basically the first thing you learn, well, ever. A smile means happy, a frown means sad, et cetera, et cetera. Figuring out expressions is just a part of growing up. It must be because their meanings are coded into our brains, right? Well, no. They’re totally not. In fact,  facial expressions might not have anything to do with emotions at all. Say what?

The Feeling with Many Faces

The idea that facial expressions and emotions have a direct, one-to-one relationship is pretty intuitive to a lot of us, and in fact, there’s a fair amount of research that’s still accepted today that suggests that’s the case. Paul Ekman (you might know him as the guy “Lie to Me” is based on) produced one landmark study in 1971 that seemed to affirm that this was the case. He aimed his research at communities of people living in isolated places such as Papua New Guinea. Confident that his participants had had virtually no experience with Western cultural mores, he asked them   to make facial expressions appropriate for a variety of situations: if they wanted to start a fight, if they had stepped on a dead pig, if a friend had come to visit, and if their child had died. Even Westerners could identify their facial expressions as “anger,” “disgust,” “happiness,” and “sadness.” Therefore, we must all be born with emotions hardcoded into our facial expressions. Case closed.

Flash forward nearly 50 years, and Ekman’s work is almost universally accepted. You’ll see it reflected everywhere, from the “How Are You Feeling?” posters in kindergarten classes to some of the United States’ terrorist identification programs. But many psychologists have begun to doubt some of Ekman’s sweeping conclusions. One of those psychologists, Carlos Crivelli, hoped to challenge the notion of universal facial expressions by revisiting the same islands that Ekman visited so many years ago. But unlike Ekman, Crivelli and his colleague Sergio Jarillo made a point of embedding themselves in the community. They learned the language, stayed with host families, and took on clan names.

Crivelli and Jarillo didn’t stay with the same people Ekman studied (they were with the Trobriander people of Trobriand Island, while Ekman’s study focused on the Fore tribe of the mainland), but they came back with similarly transformative results. Since they didn’t need translators or cultural liaisons, they were able to test the participants with less mediation and thus fewer weak points in communication. And when they asked their host communities to identify emotions based on the standard Western expressions, they got answers all over the board. Smiling was usually identified as “happiness,” but the Trobrianders couldn’t agree on the meaning of a scrunched-up nose (often called “disgust” in standard emotion charts) or a neutral

expression. What the researchers found most striking was that Trobrianders overwhelmingly agreed that a gasping face — the one labeled “shock” or “fear” in our charts — actually was an expression of aggression and anger.

Speaking with the BBC, psychology professor Alan Fridlund suggested an alternative explanation for facial expressions besides assigning them a simple emotional value. He also co-authored a paper with Crivelli on the same topic. The face, he says, acts “like a road sign to affect the traffic that’s going past it.” In other words, facial expressions are ways we can subconsciously try to “direct” a social interaction. That’s in line with a 2017 study suggesting that not many people express their actual emotions on their face. Maybe humans are more guarded with their inner lives and more manipulative when it comes to facial expressions than we previously thought.

Of course, that’s not to say that you can’t learn anything from a facial expression, nor that the rest of the world is out to fool you with their tricky looks. James A. Russell, who also worked on Crivelli’s Trobriander project, suggests that the truth might be closer to what he calls “minimal universality.” The face can only create so many different expressions, so it is perhaps not surprising that the same expressions would recur in unrelated cultures. However, the actual meaning of that expression could change depending on context.

If your expression is more about navigating social situations than expressing your inner truth, though, then researchers might find more accuracy in identifying expressions when they can identify social situations those expressions might be found in. And in fact, that’s exactly what happened. Just look at the “emotions” that Ekland originally described as being universal across cultural boundaries. He didn’t ask his Papua New Guinean participants for an “angry” face; he asked for a “start a fight” face. All of the other emotions are described in similarly social contexts. The fact is, emotions don’t exist in a void, but they do remain to some degree inaccessible. It’s probably better to read a person’s face for what they want to happen next, and not to guess their inner lives

to state publicly that something is true synonym confirm

he customs, social behaviour, and moral values of a particular group

an idea, belief, or opinion

an alternative idea, plan etc is different from the one you have and can be used instead

?What did Paul Ekman find out about human expressions

?Is his idea still accepted

?What is the new belief about facial expressions and can they be trusted

?What is a facial expression directly related to