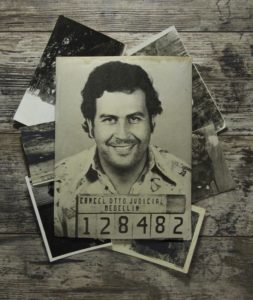 Pablo Escobar was the wealthiest criminal in history, but “wealthy” barely covers it. Escobar, known as the “King of Cocaine,” had an estimated net worth of $30 billion for heading up Colombia’s infamous Medellín Cartel. At the height of the cartel’s sales, it supplied up to 90 percent of all cocaine in the United States, and as much as 80 percent of the total global cocaine supply. Profits were through the roof. In their peak, Escobar and his cartel made $60 million per day by smuggling cocaine into the United States from Colombia.

Escobar had more money than he knew what to do with, and he was making it too quickly to launder. Just keeping it all bundled required spending $2,500 a month on rubber bands. But where to put those bundles was another problem. Escobar stored his excessive amounts of money in dilapidated warehouses, fields, and in the walls of houses. He estimated he lost $2.1 billion every year due to water damage, rats eating the cash, and simply forgetting where money was stored.

He had so much money that he bought anything he could think of. Escobar built a private zoo filled with hippos, giraffes, elephants, and other animals. The man bought two submarines to transport cocaine. And, in the ultimate power grab, he managed to get himself elected to Colombia’s Congress. Later, while the Escobar family was in hiding, his daughter got sick. To keep her warm, Escobar allegedly burned about two million dollars.

So crime pays, right? Not exactly. Colombian police caught up to Escobar in 1993. The drug kingpin died in a shootout at the age of 44 — though keep in mind, this was not his first brush with violence. Escobar reportedly killed hundreds of people, including innocent bystanders; his cartel killed thousands. His ruthlessness was at least as  striking as his fortune.

?Where Is Escobar’s Money Today

This is the billion-dollar question, and here’s the answer: no one knows. This is part of why Escobar remains a heavily mythologized figure, even decades after his death. Netflix’s “Narcos,” for instance, is based on Escobar and his misadventures.

The Colombian government has already found roughly $100 million of his assets, including literal gold bullion, in nooks and crannies throughout the country. However, some estimate more than $1 billion of Escobar’s fortune is still unaccounted for. Plenty of people are trying to change that, from amateur sleuths to ex-CIA agents. In 2017, the Discovery Channel ran an investigative series, “Finding Escobar’s Millions,” which documented two ex-intelligence officers as they traveled through Colombia, looking for Escobar’s buried treasure.

There’s certainly reason to believe it’s buried, or stashed in a maze of cubbies and holes. Escobar often buried money with corpses of people he’d killed, and his cartel’s accountant wrote, in a book titled “The Accountant’s Story”: “The biggest headache was hiding the money … I created the system of caletas, small hiding places in the walls of houses and apartments … there could be as much as $5 million in cash hidden in a single caleta.“

The book does not specify where these caletas are, though — and at this point, your guess is as good as anyone’s.

only with great difficulty or effort synonym only just

well known for being bad or evil

to take something or someone illegally from one country to another

to put money which has been obtained illegally into legal businesses and bank accounts, so that you can hide it or use it

a group of things such as papers, clothes, or sticks that are fastened or tied together

a dilapidated building, vehicle etc is old and in very bad condition

used when reporting something that people say is true, although it has not been proved

someone who watches what is happening without taking part synonym onlooker

?Who was Pablo Escobar

?How much money did he make per day and how he made this money

?What was Escobar’s biggest worry

?What happened to him

?What happened to his money