?Is There a Difference Between Male and Female Brains 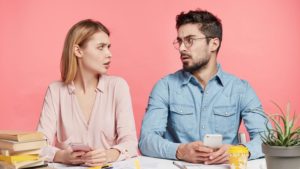 Last month, UK researchers published the largest study ever of structural differences in the brains of men and women, looking at a whopping ۵,۲۱۶ brains in all. If you think such a massive undertaking would close the book on one of the most controversial questions in science, you’d be wrong. That’s because, while there are real differences in structure and function in the brains of men and women, how that translates to behavior is still an open question.

Battle of the Sexes

The debate over the existence and degree of differences between male and female brains (biologically speaking; gender identity is a whole other ball of wax) is heated, to say the least. Some say that there are hardwired differences between the sexes that explain everything from relationship dynamics to our favorite colors. Those on the opposite end of the spectrum say there are no differences at all; that every behavioral disparity is a result of culture and upbringing.

Science has certainly spotted a few differences, though the causes behind them are hard to determine. There are studies showing that men prefer objects while women prefer people, even in infancy. Research shows that men are generally better at rotating objects in their minds — a test of visuospatial ability — while women have superior language skills. Men have a better working memory than women; women are better at retrieving information from long-term memory than men. There’s also some evidence that men and women navigate differently, with women more likely to use landmarks and men more likely to merely estimate distance and direction.

But this study didn’t find any of that. Why? This was a study into structure and function, not behavior. That said, here’s what the researchers found.

That’s obvious — men have larger brains in general (just as they have larger hands, legs, and livers), so the individual parts of their brains are bound to be bigger as well. (However, it’s possible that this size difference translates to a real functional difference. We don’t yet know enough to be sure.)

Even taking overall size into account, there is a ton of overlap. There’s likely to be more of a difference between any two brains you’d choose to compare than there is between male and female brains overall. Plus, most of these brains were middle-aged, and previous research has shown that gender differences can vary substantially depending on the age at which you measure them.

Still, when adjusted for overall brain volume, a few key differences showed up. “The higher male volume in our study appeared largest in some regions involved in emotion and decision-making,” the authors wrote. That included the orbitofrontal cortex, the insula, and the cingulate gyrus: a part of the emotion-centric limbic system. Female brains, meanwhile, tended to have a thicker cerebral cortex, which has associations with general intelligence.

?What Does This Tell Us

As we said earlier, the study looked at structural differences, not how those structures related to behavioral differences. The authors note, “…our intention in the present study was to characterize, not necessarily explain, these differences.” Even once you know that there are average differences between male and female brains, you still can’t conclude that those are the reasons for differences in behavior between the sexes.

It’s possible that differences in people’s brains cause differences in their behavior, but it’s also just as possible that differences in life experience cause differences in people’s brains. One famous example of the way life experience might shape your brain is in a 2011 study of London taxi drivers, which found that the hippocampus — a structure responsible for long-term memory and spatial navigation — grew after the drivers gained experience navigating the city streets. You could scan the brains of cab drivers and see that they had larger hippocampi than the average person, but only scanning their brains over time would tell you whether their occupation led to that size difference or the size difference led to their choice of occupation.

The experience of being a man is fundamentally different from the experience of being a woman. “That throws a huge wrench in the works for trying to relate the differences in brain structure to different behaviors,” says David Freedman, professor of neurobiology at the University of Chicago, who was not involved in the UK study. “You can’t do the controlled experiments. I don’t know if you could ever come up with a group of men and a group of women where you could say, ‘Well, they have an equivalent life experience and so it’s valid to make the comparison.’ That’s what makes it super hard to really say something conclusive.”

Scientists will keep studying the differences between men and women, but it’s important to understand just how much we still don’t know — and exactly how much we can know. In the “battle of the sexes,” it might be tempting to take a win from a flashy new study and run with it, but it’s a good idea to stop and think about how much it’s really saying

causing a lot of disagreement, because many people have strong opinions about the subject being discussed

a difference between two or more things, especially an unfair one

to find something and bring it back

if one quality, sound etc overlays another, it is added to it and is often stronger or more noticeable

To be very much different

relating to the most basic and important parts of something

showing that something is definitely true opposite inconclusive

?How is the behavior of men and women different

?What are the similarities and differences between male and female brains

?Could scientists be sure about their findings? Why? Why not

?What is the effect of experiences on brain